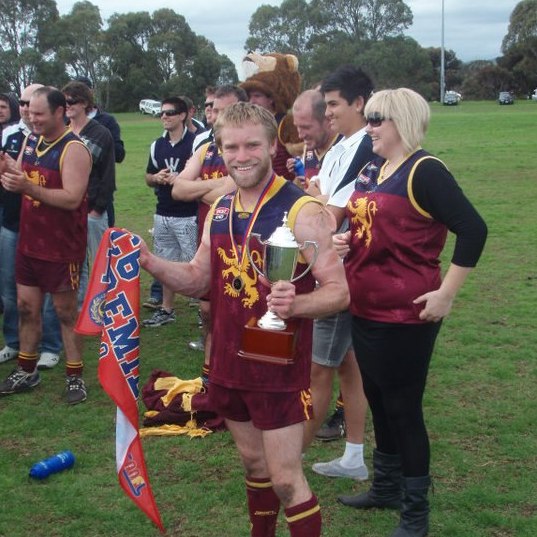 So, 10 years ago, a team coached by Scott Marks, and lead by Paul Cutler, brought home the C6 premiership cup with a win over PAOC.

This team was a great team of mates, who had that one year together to get the ultimate success for each other and for the Maroon Gold and Blue.

2010 was a tight year, with Golden Grove sitting top all year, beating us easily out in the sticks before a slip of a game by us losing to Lockleys gave them the minor premiership. But that didn’t stop the D-train inflicting the Grove’s first loss of the season at the Den in the last game of the regular season.

Going into the first final against PAOC was a hard fought game with the Lions getting up by just a couple of points which set up a semi final bout against the Kookaburras which again was close all game and thanks to a late spoil from a young Keaton Thomas, the Lions won by a point and advanced to the GF. In the Premlim final PAOC knocked off Bronze Grove, as they were now known, by under a kick again, and it was us against PAOC in the big dance.

Grand final day, and PAOC rock up wearing Adelaide Uni jumpers. It was a slow start by the Lions, giving up the first 2 goals quickly before 2 very dubious 25 metre penalties for over stepping the mark, gave Brad O’Malley 2 goals, before skipper Paul Cutler put the Lions in the lead for the first time in the game. When Dallas Pitt scored on the siren we had a 4 goal lead at 1/4 time. The next 2 quarters were tight footy with both teams trading goals and the Lions holding a 3 goal lead at 3/4 time thanks, in part, to a cameo appearance from someone’s dog, which ate up some valuable time. Matty Curtis started to get on top in the ruck in the last quarter, feeding the midfield of Hart, Matthews and league medallist Forby, with silk, which lead to the Lions running home with a 3 goal to 1 last quarter, for a 6 goal win overall.

Some of the big features during the year were; a strong backline lead by the Darlington brothers making it hard for any team to score and scaring most blokes; Pud and the Colonel up forward being targets all year with Tom Vasic and Wod crumbing at their feet; a breakout year by Stef Hoffman and a pre game night not to forget.

A special year finished with a massive celebration! Thank you again for your service. Congratulations.

Vote for your slice of Heaven