Sam “Fossil” Morris spent his junior days playing for West Lakes and WWT Eagles before returning to the Den in 2001 to play in the seniors. In his long, long spanning career at The Den he has collected himself a few personal and team highlights.

He was a premiership player in 2003 Div4, 2007 Div3, back to back 2012 Div3R, 2013 Div2R and an A grade best & fairest winner in 2006. A super reliable back pocket player, Sam had his name pencilled into the position before teams were even discussed and it earnt himself a place in the Team of the Decade.

Sam is what you call a true club man, starting as a little West Lakes junior in 1990 and combine this with his junior games he would be pushing 500 club games. Sam played in multiple junior premierships and grand finals and was part of Bert Ritcher’s under 17’s side that had a huge part in our mid 2000’s success with many of those players going on to play A grade. Over the years Sam has held various committee roles, ran quiz nights and even just last weekend was on BBQ duty.

In 2014 he was made a SMOSH West Lakes Life Member for services rendered to the club. Sam isn’t known for his bustling speed, agility, sledging opposition players, thick head of hair, high marking or kicking goals from set shots – but over time he has won over a small handful of fans with his accurate kicking out of defence and clean possession. Not sure if it is his ability to read the play or work at ground level that has seen him win more coaches awards than any other player listed, read into that what you will though. I’m sure his wife Danielle and the kids are very proud of his achievements on and off the field. Congratulations to a fantastic bloke, great family man and one of the truly great Lions. I am sure you will all be down at The Den on Saturday to cheer on this old Lion and give the team a lift to bury the Hawks and make it a memorable one.

Well Done Sammie, and congratulations also to Kaiden Huynh for 100 games this week as well #UpTheDen 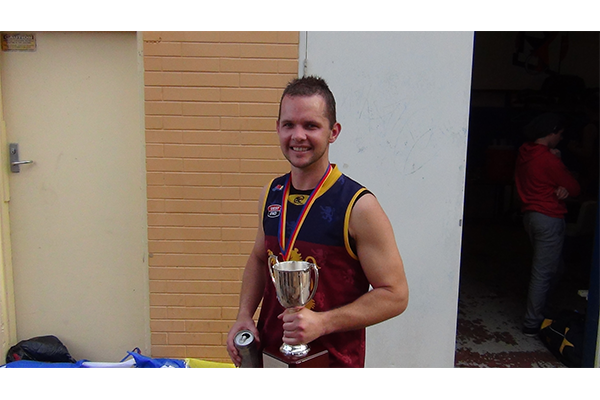