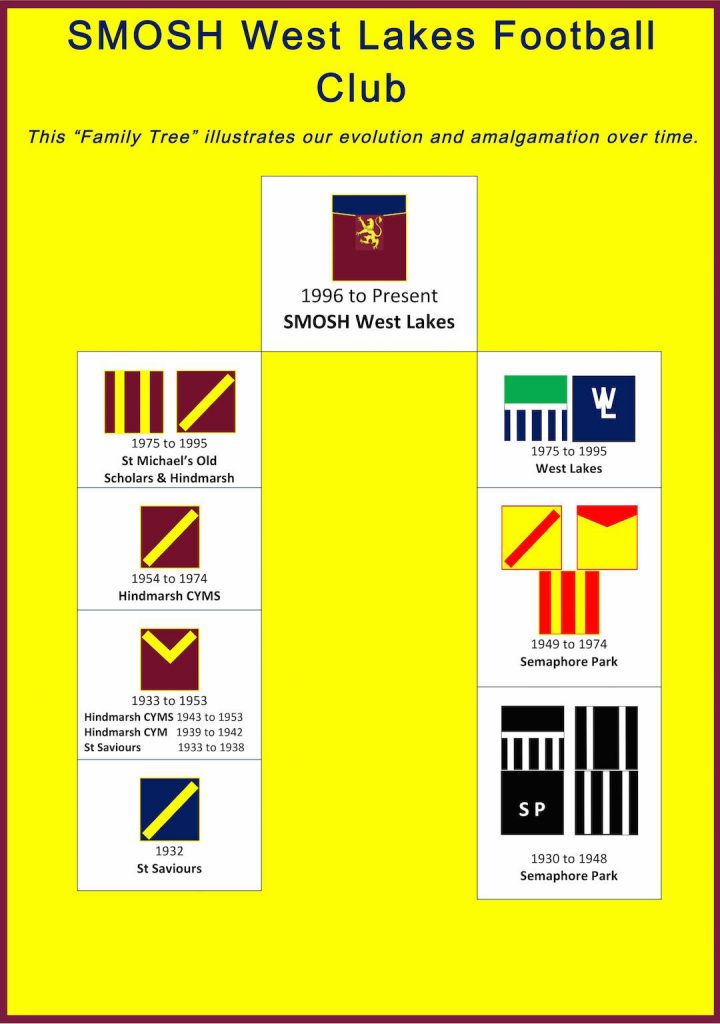 The roots of this club began with Semaphore Park Football Club (FC) entering the Amateur League in 1951 and Hindmarsh CYMS FC in 1968. In 1975, Hindmarsh CYMS FC became the SMOSH FC, and Semaphore Park became the West Lakes FC whilst playing in the South Australian Football Association (SAFA) in 1984. In 1988, due to the SAFA competition being defunct, Semaphore Park became part of the South Australian Amateur Football League (SAAFL). The SMOSH West Lakes Football Club was created as the result of a merger between those two teams in 1996, and became known as the Lions. The merger was facilitated in part because SMOSH FC needed a new home, (ex-Royal Park) and West Lakes FC was looking to play in a more competitive division.

The club’s history began in Division 2 under inaugural head coach Peter Curran. The level of competition at this level was such that the Lions struggled in those early formative years. By the end of the 1998 season the club was in extreme difficulties both on-field and off-field, which resulted in a mass exodus of senior and experienced players at end of that season. The Lions future was border-line.

A new management team took over the Club at the beginning of the 1999 season and implemented strategies to clear all debts and rebuild the Club’s fortunes by adopting Youth Development Policy. With great resolve from staff, players, and supporters the club cleared itself of all its debts during that 1999 season. However, the loss of all those senior and experienced players saw the on-field spiral continue downwards as the A grade lost 34 straight matches. As a consequence, the Lions were relegated from Division 2, to Division 3 to Division 4 in consecutive years.

In season 2001, the Club’s persistence and belief in its decision to develop its young players, was finally rewarded. Newly appointed coach Steve Nolis whose strong work ethic and commitment to the Club saw the A grade play in its first finals campaign since the merger in 1996, finishing fourth that year.

Business commitments saw the departure of Coach Nolis and the appointment of David Sorby as head coach in 2002, which saw the Lions further improve and finish a creditable third. Having built the nucleus of a good team over three seasons in Division 4 the Club was ready for the next step. Led by Captain Russell Tarca, the Lions had their best season and finally clinched an A Grade premiership and promotion back to Division 3. The depth of the club was further highlighted as the Reserve Grade also won a flag that year along with all the other senior grades, who also participated in a finals campaign. SMOSH West Lakes finished the year as the SAAFL Champion Club for 2003 after a stellar season.

Season 2004 saw the Lions have another strong year to play off in consecutive the Grand Finals. No flag, but still earned a promotion back to Division 2 where it all began for the newly merged Club in 1996. Season 2005 saw the appointment of former St. Michael’s College student and SANFL league player, Chris Kluzek as Head Coach. That year saw the A Grade achieve its highest ever post season ladder position in the SAAFL, finishing fifth in Division 2 after losing the Elimination Final. Again the impact of losing key players and strength of competition within Division 2 became evident when the Lions were relegated back to Division 3 the following 2006 season.

Redemption came quickly in 2007, when new coach Anthony Forby and Captain Ian Ralston steered the club to their second A Grade flag and subsequent promotion back to Division 2. With mixed fortunes the Lions have proven to be a competitive force in Divisions 2 and 3 over the last decade and now seek to repeat that success over the next ten years. Formerly a premiership coach with the Henley FC, Lucas Stubing joined the Club in 2008 as Head Coach and ended his run in 2015 before joining the junior coaching ranks as Football Director. He is still involved in coaching and developing the older Junior age groups.

Stubing was proceeded by Shaun Glacken, a measured Senior Coach with good experience. He lead a team of assistant coaches that worked hard on bringing talent to The Den. This led to promising finals appearances for the reserves teams but sadly the senior side fell well short of expectations, with Glacken parting ways at the end of 2020 (the year of COVID-19).  He was replaced by promising young coach Cohen Mattner – a current SMOSH WL sharp shooter who is currently forging ahead with promise.

In 2018 – with the personal drive and commitment of Life Member Anthony Forby – the club petitioned the Adelaide Footy League to register a Div 1 Womens team and reserve. This vision stemmed from the good work the junior club did with developing girls footy from U14 – U18 in the years before. As a result of displaced women’s players from neighbouring clubs, SMOSH WL leaders Stef Thomas and Zac Cook (with Forby) brokered a deal with the league to transfer 15+ women from displaced clubs and add players from the junior ranks, as well as some clever recruiting – to form the club’s inaugural all women’s team. In 2019 they quickly formed a Women’s Club committee and properly registered the team as a Club in it’s own right. Working with the senior mens, the Womens enlisted AFL Hall of Fame Port Magpie Legend – Greg Phillips – as Senior Womens coach. Greg was approached as he was fondly remembered being around the club sending daughter Erin (AFLW Champion) to junior games for SMOSH WL back in the day. It was fitting then that Greg sent the women’s Div 1 to a Premiership in it’s first year and again in 2020 with both the Div 1 and Reserves taking out the flag. Testament to a joint effort by the whole club.

From its inception in 1996 up until 2002, the club only participated in 5 finals series within its senior grades, being credited with 1 (C grade) premiership in 1999. From 2002 through till 2014, the Club’s senior teams have played in 38 finals series, winning 9 Premierships.

The facility is run by the West Lakes Sports and Social Club, which shares its tenancy with the Henley and Grange Baseball Club and the SMOSH West Lakes FC. It is very much community and family orientated and boasts a comprehensive juniors programme with experienced coaches and dedicated volunteers. With the sad loss of Club Legend Rodney “John Boy” Moody in 2015 (37 year service – Life Member and SAAFL Merit Award recipient) the club have honoured him with a plaque on the western wing and a brand new electronic scoreboard partially funded by local businesses and supporters – in his honour. Player development as well as the Lions commitment to promote youth, is reflected in that it now fields 6 Senior and 13 Junior Grades.

The club is well governed by young professionals, has support from members and sponsors, is financially sound, as well as playing a good standard of amateur league football suggesting a long and bright future. We invite any persons who may just want to be social spectators or if looking for some active involvement within the football club in any capacity, to check out our clubrooms and have chat with members and staff.